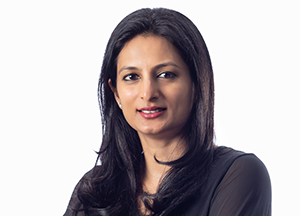 Nirupa has been with Brigade Group since 2009. She oversees the company’s hospitality, office and retail ventures. She has helped launch 5 hotels, signed up another 6 hotels, which are already in various stages of construction. She also oversees Human Resources (HR), Public Relations (PR) and Innovation functions at Brigade. She has an analytical bent of mind and has introduced a data -oriented approach towards decision making in the company.

Nirupa has the serial entrepreneurial bug in her and has successfully conceptualized and launched the multi-award-winning lounge bar HIGH Ultra Lounge in Bangalore, the highest point for food and beverage in South India in 2014. She launched India’s first and only real estate accelerator called Brigade Real Estate Accelerator Program, an initiative to mentor high-tech start-ups in real estate, including hospitality in 2016 and her latest venture is the Art Café which combines a hip, vibrant café with original masterworks accessible to millennials.

She has been identified as one of CNBC’s “Young Turks” and has previously won the:

· Entrepreneur of the Year 2017, by Future Woman Leader Summit

· Young Entrepreneur of the Year 2016 by Construction Week

Prior to joining Brigade, Nirupa worked as a Senior Business Analyst with Ernst & Young LLP in New York, Washington DC and North Carolina offices. She has bachelors in Economics from the University of Virginia and a Masters of Management in Hospitality from Cornell University.

Nirupa is very passionate about writing. Her articles are regularly published in the news and trade journals. She sits on the advisory board of Hotelier India publication, Hospitality Biz publication and the Indian School of Hospitality based out of Delhi. She is a fitness enthusiast and has recently completed a triathlon, half marathon and swimmathon. She is trained as a six sigma Black Belt.